Dark shadows & radiant light: Joseph Caldwell's memoir 'In the Shadow of the Bridge' 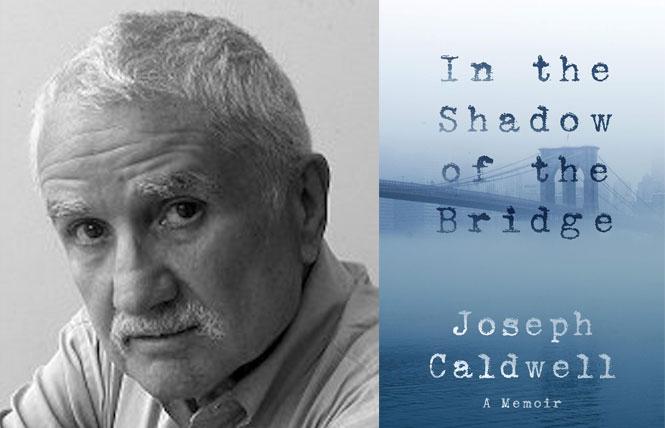 'In the Shadow of the Bridge' author Joseph Caldwell photo: Delphinium Books

Joseph Caldwell's In the Shadow of the Bridge is a heartfelt memoir about being gay in the New York City of the 1950s an '60s, as well as a remembrance of the peak years of the AIDS crisis. At 203 pages, it's a short, easy read that packs a lot of punch.

Caldwell, a novelist, playwright and a soap opera writer, remembers the life he lived in New York. He resided in what was then called a cold-water flat in a tenement building that stood literally in the shadow of the Brooklyn Bridge.

His window was so close to the bridge that he could reach out and touch it. It was the 1950s, when homosexuality was something most gay men swept under the carpet. Yet Caldwell found a community.

He recalls an early friendship with the great African American gay writer James Baldwin, and eloquently writes about sitting in bars and restaurants with the creative people who made up his social circle, all of whom seemed to be gay. It was a very different New York then. An apartment could be rented for $24 a month.

Caldwell remembers those early days with wit and heart. He gets a job at WQXR, a classical radio station, writing copy for the station's on-air staff. He begins authoring plays that are produced off Broadway. He also becomes a soap opera writer, not exactly the work he wants to do, but it paid well and enabled him to pursue his theatrical endeavors.

Fans of the horror-themed soap Dark Shadows will be fascinated by Caldwell's memories of working on that show. Caldwell co-created the character of Barnabas Collins with fellow gay writer Ron Sproat.

Barnabas was the anti-heroic vampire who put Dark Shadows on the map. Caldwell and Sproat wrote Barnabas as a "reluctant" vampire, a lonely man who was filled with shame over his bloodlust, and who had to hide his true identity from those who knew him. He was thus not unlike the two writers, gay men who often had to be "discreet" in society.

Dark Shadows creator Dan Curtis is referred to by Caldwell as "a committed homophobe" who once considered firing an actor he thought might be gay. Caldwell and Sproat intervened on the actor's behalf, noting that if Curtis were to dismiss everyone on the show who was gay, he'd also have to let go of most of his writing staff, Jonathan Frid, the actor who played Barnabas, and the show's romantic lead, Joel Crothers.

Raised a strict Catholic, Caldwell had to reconcile his religious beliefs with his sexuality. He examines this dilemma in an insightful section of the book. He questions the hypocrisy of religion, and slowly comes to terms with his faith, which he comes to see not as judgment from God, but as self-love.

The portion of the book in which Caldwell recalls the plague years are the most moving. HIV-negative Caldwell didn't want to sit around and do nothing. He volunteered at St. Vincent's Hospital, the primary care center for people with AIDS, and became an assigned buddy to 10 different patients, moving on to the next after the previous one dies.

"I wanted to do more than just wring my hands and weep or even pray," he writes.
In the midst of the crisis Caldwell calls Gale, a former boyfriend. Gale was Caldwell's first love, and he never quite got over Gale. Fifteen years after they last saw each other, Caldwell invites Gale to the theater.

Gale accepts, telling Caldwell that he is sick and that he suffers from Kaposi's Sarcoma, an AIDS-related skin cancer that causes lesions to appear all over the body. They go to the theater and renew their friendship. As Gale's illness progresses, Caldwell moves into his house to care for him. He did it out of love that hadn't diminished three decades after he and Gale had first met.

Vividly written, In the Shadow of the Bridge is an emotional journey through one man's life. It's about living one's life truthfully in a city that was once a mecca for writers, artists and performers, a city that no longer exists. But mostly it's a story of one man's enduring love for another. Now 91, Caldwell still carries that love with him.

Derek Frost's 'Living and Loving in the Age of AIDS'

Sex and sensibility: Alexander Cheves' 'My Love is a Beast: Confessions'
Sign up!