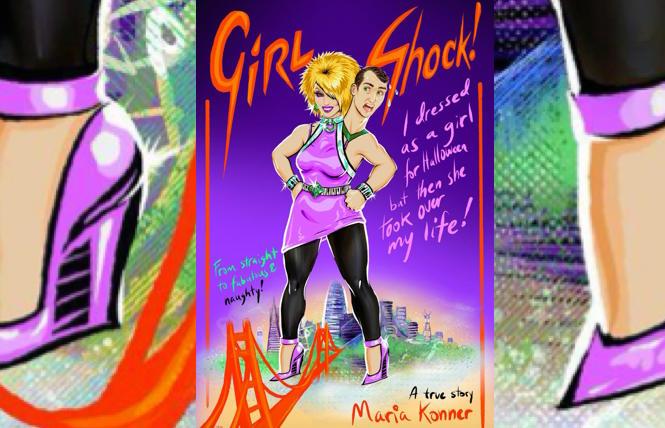 In her new memoir, Girl Shock, Maria Konner lets it all hang out. A TV host, musician, activist and sexual adventurer, Konner has lived a colorful life and has had a great time doing so.

In her previous life, Konner was a straight married man who she now refers to as "the dude." She lived what she recalls as a lonely and miserable existence in the suburbs. But as she says on the cover of the book, "I dressed as a girl for Halloween, but then she took over my life."

Girl Shock begins with Konner's discovery of her feminine side, as she shops for women's clothing and make-up for the first time. It was an exciting time for her, and these memories make for a fun read. Konner creates her female persona and takes to the streets of the Tenderloin, becoming a regular at the late, lamented trans bar Diva's. It's the beginning of a whole new life for her, and Konner comes to realize that being a woman is her true identity.

Konner holds nothing back, writing graphically of her sexual experimentation as she explores her newly discovered self. She lets readers know in advance that graphic sex is looming on the horizon with the headline 'Sordid Details' appearing on the page before she describes each adventure. She experiments with both men and women, and even discovers the joys of kink. She has the time of her life doing so. 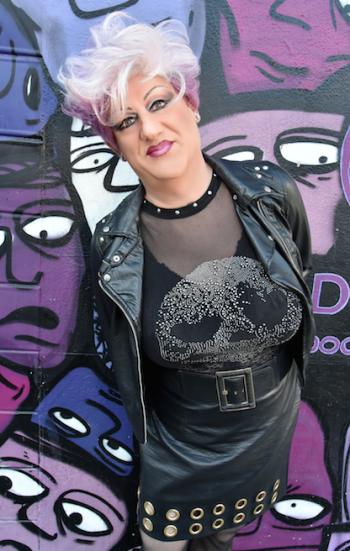 "Most of the places I wrote about like Diva's the trans bar, The Stud drag shows, the Power Exchange sex club, are the kind of places that most people have seen in a Hollywood movie," said Konner in a Bay Area Reporter interview. "I figured many people would want to know what these places are really like. I found them to be so different from how Hollywood depicts them, in reality so much deeper and so much more interesting. But these are the sort of places you need to discover for yourself to understand them, so I shared how I explored it, hoping people could relate to and appreciate it more."

Konner wrote the book, she says, primarily for straight adults, both male and female, who might be curious about trans lifestyles or might want to explore it themselves.

"I really wanted those folks to know deeply, to grok just how divine it is to live in an environment where you can explore so many aspects of yourself and meet people who are doing the same, and who are so different from you and celebrate those differences," she tells Bay Area Reporter. "This is in such stark contrast to the environment that I come from, I felt compelled to spread what I really thought of as the gift of San Francisco culture."

In sharing the story of her trans life, Konner paints quite a celebratory picture of what it can mean to be a San Franciscan. It's a familiar portrait to those already involved in the trans, drag, kink or underground nightlife communities. Konner lets the uninitiated know in no uncertain terms that San Francisco is a place where you can find and be your true self and bring your fantasies to life without guilt or judgment. 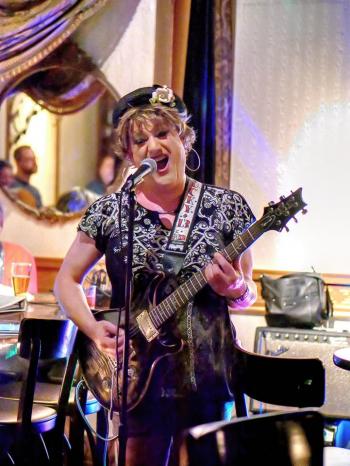 Konner says that people in the trans community are reading the book and appear to be enjoying it.

"They said they really enjoyed how it captured the moment and the feel," she said. "In particular the trans bar Diva's, which was a one of a kind place, never to be found again. The book has helped to bring back the warm feeling of the memories of just how special that place was, and a longing for the colorful and diverse San Francisco of just a few years ago that is now in a large part gone."

As with everything else Konner does, she had a blast, and her joy is infectious. She looks back upon her time at Under the Golden Gate with great fondness. These memories are highly entertaining and might make readers hope that she revives the show. Many episodes remain available for free viewing on YouTube.

Konner reports that her friends and family are reading the book. She expects them to be shocked and maybe even a bit judgmental, but asks herself if they really expected anything different. As she points out, she was always an "oddball" most of her life.

"But so far, so many of my friends and family are very supportive and excited," she reports. "I haven't had any problems, other than a few remarks betraying their confusion. I had a few ask the dude 'did you really do all of that?' I just tell them 'well, you'll have to ask Maria'. Most of them have never met Maria or met her only once at the very beginning of this journey."

Konner added that the best way for people to understand how she feels about her journey is to read the book.

"There are so many preconceived notions of what such a life might be about," she said. "I went through so many conflicting feelings and transformative thoughts that you have to take the journey to understand it and imagine putting yourself in that situation. And that's when we begin to see ourselves in each other, we are all different, but we are all also very much the same. And that's the beauty of a life that is fully lived."

Girl Shock: I Dressed As a Girl For Halloween But then She Took Over My Life is available in paperback and kindle editions.