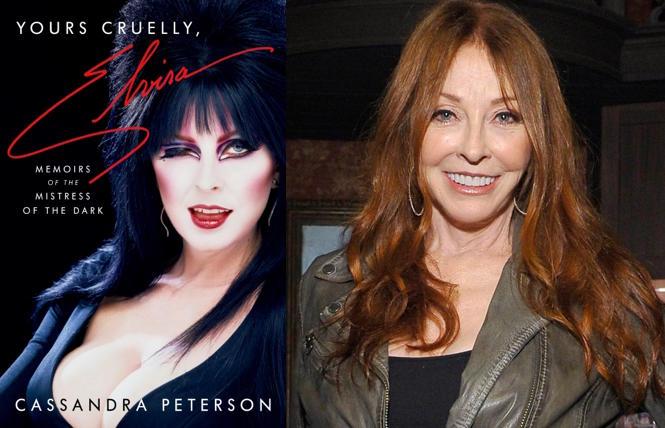 Cassandra Peterson and her 'Elvira' memoir

For those readers of a certain age who remember the kooky, campy, slinky, boobtastic, more-sexy-than-scary Elvira, Mistress of the Dark, her long-running horror movie screening series remains a camp classic. Her persona had the uncanny ability to appeal to gay audiences for her knee-slapping bad humor and Gothic costuming, and straight men for hypnotic, mesmerizing abilities of her heaving cleavage, which Elvira graciously compacted into black dresses that left little to the imagination.

The millennials weren't there and won't get it, but Elvira fans certainly will, and her new memoir, Yours Cruelly, Elvira is packed with insider details and a few shocking surprises which no one saw coming, except folks closest to her plunging neckline.

Born in Manhattan, Kansas, "a bad place to be from if you're destined for a life in show business," Cassandra Gay Peterson recalls tragedy early on when, as a toddler, she had an accident with a pot of boiling water and scalded a third of her body which required massive skin grafts.

The daughter to a loving "knight in shining armor" father and an unpredictable, insult-hurling, abusive mother, Halloween soon became her favorite holiday as she entered puberty and sprouted breasts early ("I developed faster than a Polaroid") and pursued an internal call to act and perform.

At 14, Peterson became inspired by Ann Margaret in Viva Las Vegas and began go-go dancing at Army base officers' clubs, which led to gigs as a topless Las Vegas showgirl in a stripping extravaganza called Vive Les Girls! in the early 1970s. A surreptitious conversation with Elvis and a disastrous deflowering session with Tom Jones ushered her into adulthood with blood and tears. 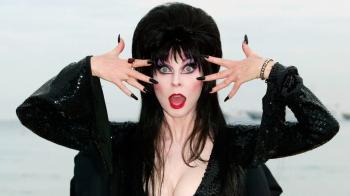 After acting and singing stints in Italy, Peterson writes passionately about returning to Los Angeles, buzzing around in a beat-up orange Volkswagen Beetle and hunting down acting jobs, all while getting groped and assaulted by everyone from perverted agents to basketball royalty Wilt Chamberlain. She also had a brief fling and posed in Playgirl with model Bill Cable.

A staunch advocate for women's rights, Peterson righteously makes her case for women who, even today, try and seek out acting roles only to become predatory fodder for the Hollywood casting couch's slippery-handed agents and directors.

"It's great to grow up feeling like you're being hunted, right girls?" she writes.

After a stagnant career and waning patience with humiliating casting calls, the now 70-year-old actress and personality rose to fame with Elvira's Movie Macabre. Debuting in September, 1981, this soon-to-become cult favorite program (even broadcast in 3D!) featured the buxom beauty of crass humor as she introduced a variety of schlocky horror movies, then popping in periodically with satirical commentary. Elvira eventually became a name brand as billboards, endorsement deals, a cult classic 1988 movie, and fan merchandise soon followed.

Peterson's memoir is written in much the same style as her persona and delivers her mildly sardonic yet warmly funny lines easily, but it's not all jokes and sarcasm. There's an honesty that satisfyingly saturates these chapters. Fans will savor personal stories about her rocky upbringing, her determination to make it in Hollywood, and, most touchingly, her deep shock and sadness at losing several close friends to the burgeoning AIDS epidemic while attempting to remain focused on her career.

There are a few zingers Peterson elaborates on which will undoubtedly surprise even hardcore fans of this dark enchantress, particularly the memoir's closing chapters intimately detailing her 19-year loving relationship with former female bodybuilder Teresa "T" Wierson, whom she met at Gold's Gym in Hollywood.

Their relationship came on the heels of her divorce from longtime husband Mark Pierson and has made Peterson feel "safe, blessed, and truly loved" ever since they moved in together.

She cautions adoring devotees and entertainment producers everywhere that "if something as personal as my private relationship causes some fans to no longer enjoy my work, or if a company chooses not to work with me because of it —well, all I can say is, "Fuck 'em." That's their problem."