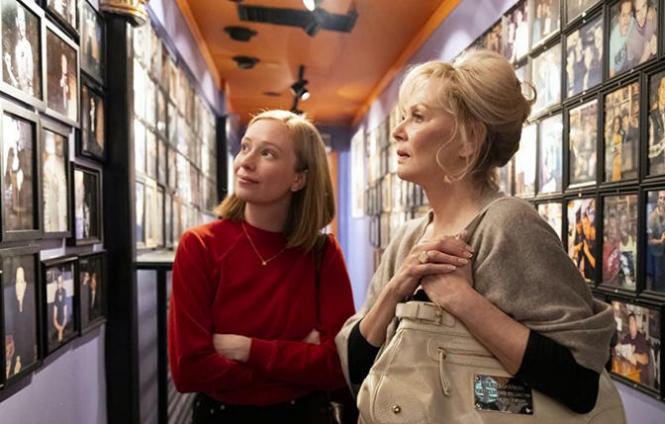 Have you seen HBO's Hacks yet? Why not? It's funny as hell, quite queer, nominated for Emmys, and last month was picked up for a second season. Co-created by Lucia Aniello, Paul W. Downs and Jen Statsky, all of Broad City fame, Hacks is must-watch TV and another reminder that HBO is back, baby.

We forget how many years we've been watching Jean Smart; since Designing Women. Now she's popping up in everything (she was fantastic in Mare of Easttown, Watchmen and Dirty John) and who says an actress pushing 70 can't still be a star?

Smart money (sorry; couldn't resist) says yes. In Hacks, Smart plays Deborah Vance, a legendary Las Vegas stand-up comedian and total diva. (There is a scene where, dressed in a soignée orange caftan and picture hat, she frisbees her laptop into her pool in a fit of pique as she calls out to her assistant that they will need to go to the computer store; pitch perfect delivery.) 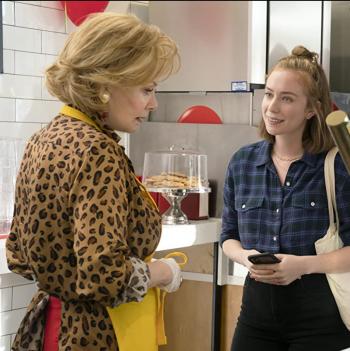 But times have changed and Deborah's material hasn't. The 'Queen of Comedy' is on the cusp of irrelevance, the worst possible thing for a diva like Deborah, who is used to being a star. She started in Vegas with 2,500 shows and now the head of the casino where she has been a headliner is pushing her out and —she might be a second act for— Pentatonics!

To say this series is laugh-out-loud funny in a darkly acerbic way and that Smart is pure genius in a role that seems to have been written totally for her is to understate, not hyperbolize. Smart is brilliant. The laughs are real, even as they often are painful.

Hacks isn't just for laughs. It delves deep into how hard it is for women to get star status and how easily women can lose their place at the table, and given far less slack than men.

Enter Ava Daniels (Hannah Einbinder). Ava is a Gen Z comedy writer who has totally screwed her life with an ill-considered tweet that left her miserable and unemployable, a victim of the much-touted cancel culture. (Einbinder's mother is Laraine Newman, one of Saturday Night Live's original Not Ready for Prime Time Players, so she comes by comedy genetically.)

Ava is hired to make Deborah relevant to a new audience. Their initial meeting is wild and goes awry almost immediately. Deborah looks her up and down and asks her flatly, "Are you a lesbian?" Deborah wants to know why Ava is "dressed like Rachel Maddow's mechanic."

Ava explains in detail about who she is and ends with, "I'm bi." 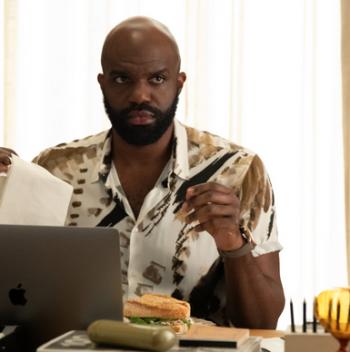 Einbinder is bi in real life and has said in interviews that the lack of representation of bisexuality in popular culture had left her with no models, which makes her role as Ava all the more important personally. There's none of the standard erasure of bisexuality in Hacks.

How Ava and Deborah find their footing —as individuals and as a comedic partnership— is what makes Hacks resonate. Smart is off-the-charts spectacular, but Einbinder holds her own against that powerhouse. Ava's angst, her sense of loss, her humor; it's all very real and true. Just as Deborah's rage at being aged out is very real and guttingly honest.

There are a plethora of secondary characters who give the series more layers, among them Marcus, Deborah's chief operating officer. Marcus is played by Carl Clemons-Hopkins, who identifies as queer and non-binary, and who made history by being the first non-binary actor to be nominated for an Emmy for their standout performance in the series.

Clemons-Hopkins wrote a very compelling column for The Hollywood Reporter about masculinity, gender variance and coming to terms with their non-heterosexual self.

This is a tale of two women on the edge, dealing with the hazards of their femaleness, their comedic craft, endemic sexism and the vicissitudes of a fluctuating and often pernicious industry. There's a lot here and Smart and Einbinder are tremendous, so watch it.

Soap and change
Will Horton (Chandler Massey) and Jackson "Sonny" Kiriakis (Freddie Smith) were Days of Our Lives' first same-sex super-couple, launched by the series in 2012. They were the first queer couple to have a male-male wedding in U.S. daytime drama history in 2015. (All My Children had the first lesbian wedding years earlier, as we wrote way back in 2009. 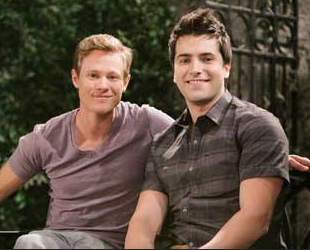 Chandler Massey and Freddie Smith in 'Days of Our Lives'

But then Will was murdered in 2015. But, this being a soap opera, he was resurrected in 2017. Then last February, in an unpopular move, the actors were fired and their storyline ended in September. Rumors of a return have been floating ever since. And Days also flirted with a les/bi storyline in May between Chanel and Allie.

Now, there's good news/bad news about Will and Sonny. The couple is not coming back to Days, but to a limited series spin-off where Freddie Smith will not be playing Sonny. Sigh.

Chandler Massey reprises as Will while Sonny was recast with Zachary Atticus Tinker, known for his role as Fenmore Baldwin on The Young and the Restless.

Smith and his wife Alyssa posted a video to their YouTube channel The Freddie and Alyssa Show where Smith, who has played Sonny since 2011, explained his decision was to not return to Days. Smith also recorded a video message for Tinker, congratulating him on assuming the role.

So, not much air time in five episodes and only available on Peacock, but we'll take it.

That's a Nyet
We are slowly coming off our Olympics jag, which had us awake for days on end, screaming for Team USA. But watching Simone Biles' comeback and the USWNT at 4:30am definitely was not ideal. But it was glorious.

We're grateful there's a break before the Paralympics so we can rest up. (More on those next column; and yes, queer participants there, too!)

We were pretty disgusted that Russia chose to flout the rules and show up for the Olympics they were banned from by calling themselves a different name, the Russian Olympic Committee (ROC), sans Russian flag or anthem. 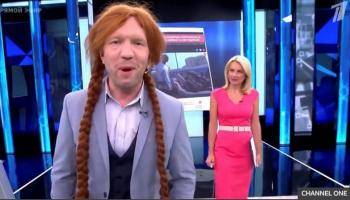 Prior to the Olympics in Sochi in 2014, Putin conflated homosexuality with pedophilia, so TV talk shows using terms like "abomination" and "perversion" for the Tokyo Olympics was awful, yet unsurprising. A panelist on a Russian 60 Minutes-style program, Alexei Zhuravlyov, who is a member of the Russian parliament, said he was "disgusted" by gay and transgender people.

"We stand opposed to all this smut and perversion, strongly opposed," he told the show, pointing at the studio screen which showed Hubbard. "We stand against this abomination," he said. Zhuravlyov used an offensive Russian word to describe gay men. Other offensive language was used about trans people.

On state TV's Channel One, Russia's second most-watched channel and the official Olympics network, Anatoly Kuzichev, host of the show Time Will Tell, wore a wig and mocked Laurel Hubbard. He called trans people "psychopaths" and suggested that they should be treated by psychiatrists.

Another Russian MP, Pyotr Tolstoy from the Kremlin's United Russia party, argued on a different episode of the series that the Olympics were trying to "implant [a Western] agenda of equal rights, additional rights for LGBT, transgender people and other perverts into the Olympic movement."

An International Olympic Committee (IOC) spokesman said in a statement, "Discrimination has absolutely no place at the Olympic Games." 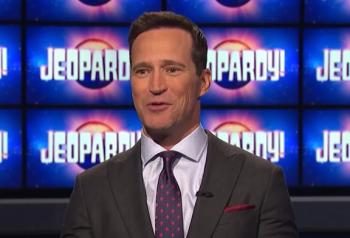 Game showing
Jeopardy is allegedly about to hire a permanent host to fill the slot left by the legendary Alex Trebek. Mike Richards, the current executive producer of Jeopardy was one of numerous guest hosts since Trebek's death.

Fans of the show are not happy with the possibility and were quick to point to Richards having been the subject of two sexual harassment and discrimination suits in his role at The Price Is Right.

It seems like a terrible option among all the many good options. Our choice remains; LeVar Burton, who tweeted his gratitude for his run as guest host and the love from fans, "...no matter the outcome, I've won...I am truly blessed beyond measure."

For the sublime and the ridiculous, you know you really must stay tuned.

Sportertainment: The Lavender Tube on LGBT athletes & allies at the Tokyo Olympics