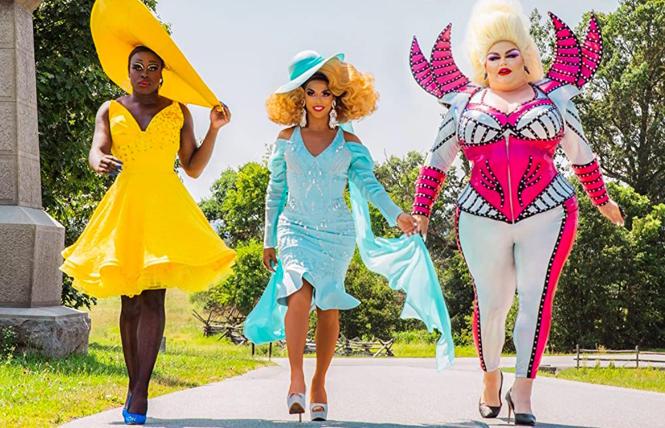 Bob the Drag Queen, Shangela and Eureka in 'We're Here'

The show's concept is simple: three famous drag performers, Shangela, Eureka, and Bob the Drag Queen descend on a variety of small towns across America and mentor local community members by transforming them into drag queens and performing in a show with them. In doing so, they teach their pupils to embrace their true selves with confidence and love. The show can be seen on HBO and will also stream on HBO Max.

The first episode of season two finds our drag friends in Spartanburg, South Carolina, a genteel southern town where people are warm and welcoming. And yet, it's not easy to be gay in Spartanburg, a town where heteronormative conservative values run deep.

Handsome Noah presents as a gay man even as he speaks of being afraid to hold his partner's hand in public. Faith, a plus-sized African American lesbian, wants her family to accept her for the woman she is. And Olin, a bearded married straight dude with children, agrees to perform in a drag show to support his gay brother Pat, who's been a professional drag queen in the area for twenty years.

The cameras follow all three of them as they are schooled in the various aspects of how to perform in drag. They learn how to create a character, how to dress themselves up, and how to strut on stage in heels. 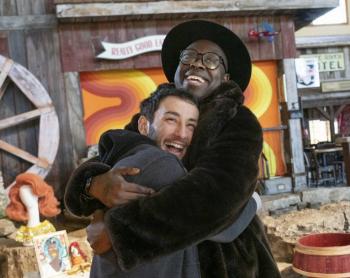 For Noah, the experience enables him to embrace his true, non-binary self. In Olin's case, drag brings him closer to his brother, whom he loves. Olin and Pat even convince their reserved, old-school father to attend his first drag show, and Faith is embraced by her entire family.

Each episode of We're Here brings the drag stars to another small town, where they mentor another group of fledgling queens.

Unapologetically fabulous
Peter LoGreco, the series' showrunner and director, spoke to the Bay Area Reporter about what attracted him to the series.

"For this show there actually is an opportunity to do something that looks closely at what life is really like in small town America," LoGreco said. "And to try and paint a picture through this very unique lens, and a potentially provocative lens, where people who are openly LGBTQ are coming in and unapologetically being who they are, and hopefully forcing a discussion that takes us into this realm of how divided are we actually. How polarized are things? How conservative is small town America? What can we do to try and bridge those gaps?" 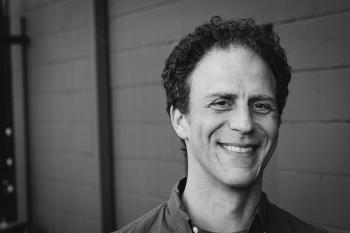 There are scenes in the Spartanburg episode that indeed bridge the gaps between the gay and straight worlds. In one early sequence, a local woman has the drag queens over to tea at her plantation-styled house. She admits that having drag queens as guests is a first for her.

LoGreco said that the show's subjects —those who were being groomed to be drag queens— were found through social media outreach, by reading news stories about LGBTQ issues in smaller communities, and through personal connections, asking people they knew or people they encountered if they had any friends or family members who might be queer.

"I prefer to work with people whose first priority is not to be on TV," said LoGreco. "If that's their first priority, then it could be a little more suspect whether or not the sincerity of their story is at the forefront of their goals. I want to give people a voice, and I think people being truthful and less performative just jives with the style we want for the show and what I'd like this series to be highlighting."

LoGreco added that response from We're Here viewers has been "remarkably positive."

"It really has been so rewarding to hear how frequently people feel like this show even as viewers can have an impact on them," he said. "We've received emails and different communications from people talking about how it's facilitated conversations within their families. Teenagers have watched the show with their families and then come out to their parents. 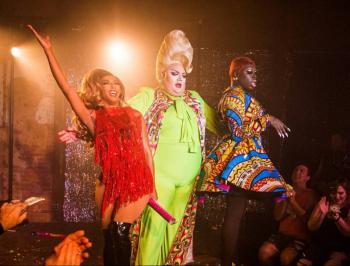 Shangela, Eureka and Bob the Drag Queen in 'We're Here'

"That kind of thing is super-surprising in the best way. To be able to do something that you're doing primarily as a form of entertainment that you hope has a meaningful underpinning to it, and then to hear that it has an affect that goes beyond the people who are participating in the show but also to the people who are watching us, I couldn't ask for more."

The positive response has also come from the townspeople where the series has filmed.

"It seems there's an overwhelming energy that the queens bring to the table that seems to empower people to actually embrace one another more. It almost feels like people are being given permission by drag queens and by the presence of the drag show to just enjoy themselves and to celebrate their community. I think we've all been by and large impressed by how much more of a desire there is to do that than there is to hate on each other."

And for those on the fence about watching We're Here, LoGreco has a simple message.

"The show is definitely not just for LGBTQ people," he said. "And it's not just about drag. There's a tremendously fun spectacle to it and it's incredibly entertaining and it's really hard not to be swept up in that energy. So if you're looking to have a good time and really get a dose of positivity about what's possible for us as a culture and us as a country, it's a show worth watching. But mostly it's super fun."

Out in the Bay: Drag Racer Rock M. Sakura seeks superpower and responds to anti-Asian violence
Sign up!