Ruth Coker Burks' 'All the Young Men' - a big-hearted memoir 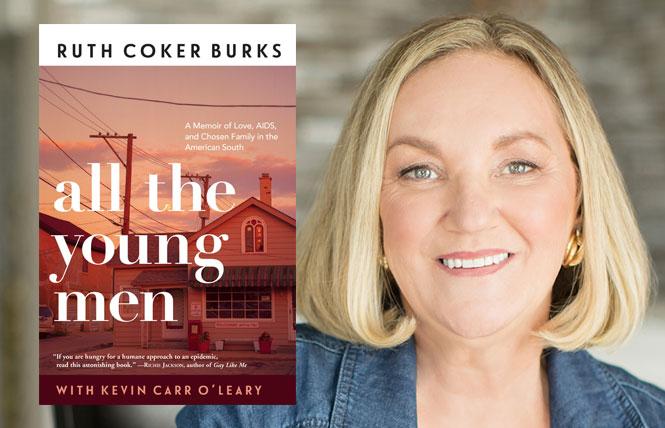 That gay men who lived through the crisis years of the AIDS epidemic feel triggered by the Covid-19 pandemic now upon us is hardly surprising. I'm triggered. Reading All the Young Men (Grove Press), Ruth Coker Burks' big-hearted memoir of working in support of gay men with HIV —in the period not just before the advent of the protease inhibitors but before there was even a name for the virus, let alone clarity about how it was transmitted— brings that singular kind of consolation, and even joy, that comes with the finding of meaning in tragedy.

Burks' co-author, Kevin Carr O'Leary, surely merits some of the credit for the book's sure-footedness, but the story retains a strong personal voice. A 26-year-old divorced single mother Southern bottle-blonde, Burks literally stepped into AIDS service work unintentionally, on a trip to visit her friend Bonnie in a Little Rock, Arkansas hospital in 1986.

The book's chillingly familiar opening pages re-create Burks' horror at seeing nurses in the hallway near Bonnie's room literally drawing straws to see who would have to go in —and in the most minimal ways 'nurse'— the young man in a nearby isolation room. His food trays, with their spoiled, uneaten offerings, lined the hallway floor. Terrified of contracting the man's disease, about which next to nothing but the evident horror was known, the nurses were derisive as well as dismissive.

With none of the knowledge of HIV that she would acquire, hungrily and usually on her own over the years, Burks, eschewing the paper gowns and rubber gloves the nurses insisted she wear, took a tray of food to the man, Jimmy, held his hand and listened to him and, at his request, called his obdurately rejecting mother. For Burks it was not yet a mission, simply the right thing to do.

Jimmy, who died the next day, became the first in a long line of PWAs that became the focus of Burks' life — her personal life, lived without the shield of a public-health-profession title or, early on, anyone's blessing but Bonnie's.

"Sitting with [these young men], I saw a river. I felt like I was taking these young men in my arms and carrying them across the river to the other side," she relates. "I took them over that river and handed them safely to those who would love them."

At that time, countless lesbians and gay men would come to do, voluntarily, the same concrete, direct work Burks undertook, or in Burks' case without institutional support. It's her modesty in recounting what she and the others who joined her did that lies at the warm, beating heart of this story.

"Cooking" for the physically wasted young men entailed obtaining foods that went beyond her meager budget — but not the foods' sell-by dates, in supermarket refuse bins. "Once you're taking food from a dumpster, you're in," she notes with relish.

Burks' story spans the pre-protease cocktail days, and it includes dealing with the stigma of HIV as much as its medical horrors. She's more accepting of having to learn, from gay men who used the term, that she was not a fag hag. She's unsparing about the condescension she later endured by the HIV professionals who often had little idea of the kind of literally groundwork —she made places for their ashes in a family burial plot— she routinely did.

Her work brought her to the attention of an Arkansas Governor Clinton who gave her a place of appreciation and honor at his inauguration as President in 1993. Burks was far less absorbed by the celebrity of it all than in having the right dress —a matter she left to the judgment of her drag queen best friend. Billy is as central a character in her story as her young daughter Allison, who at first endures the stigma assigned her by her elementary school classmates, because of her mother's work, only to grow into the realization that her real friends were the gay men into whose lives she was swept.

Like so much current queer writing, this is a story of the American South, discernable in Burks' colorful language. "At times it felt like I was juggling chain saws and kittens," she allows. But what cumulatively distinguishes her story is how down to earth it is, as appreciative of the humor as of the horror of the epidemic whirling around her.

Hearing one of the men speak about the pledge of undying love he had promised his declining lover, "I wanted to tell him what I had learned: that love doesn't go away and neither does grief," Burks writes. "You just keep going, living with both of them. And maybe you get to hold someone to stay warm."

Author celebrates being gay in memoir to son
Sign up!