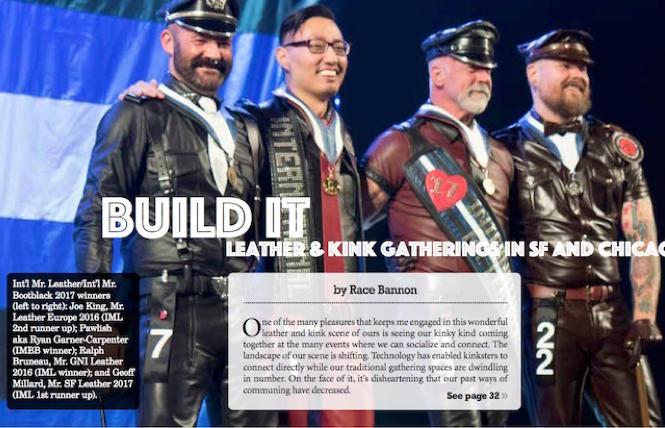 One of the qualities I love about the Bay Area Reporter is their stalwart support for diverse communities from their founding, including leather. In honor of the B.A.R.'s 50th anniversary, let's look back on the past five decades of local leather seen through the lens of the paper, which is admittedly but a smidgen of the entirety of local leather history. 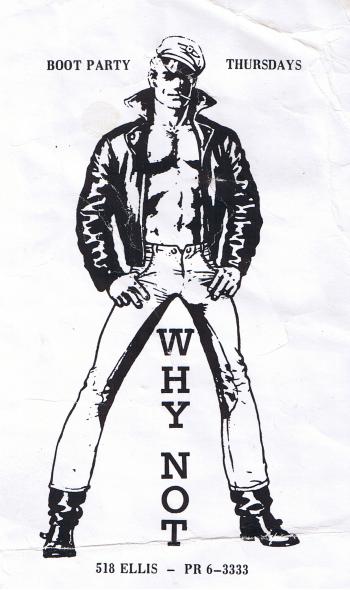 While we know leathermen frequented some San Francisco waterfront bars as far back as the 1950s, leather bars helped create a stronger community, some of it centered around motorcycles and the accompanying aesthetic.

Also, in 1962, the iconic Tool Box bar opened at 4th and Harrison as South of Market's first leather bar. It was a huge hit, sometimes garnering national attention including having its famous Chuck Arnett mural as the main illustration in a sensationalist 1964 Life magazine article on homosexuality in America.

Leather social life at the time centered mostly around bars. They were the meeting places, the cruising places, and where friendships were cemented. The Detour, On the Levee, Febe's, and the Stud, along with leather-oriented sex venues such as The Slot and other businesses, ushered in an era of South of Market leather dominance, an area that remains to this day the center of local leather life. 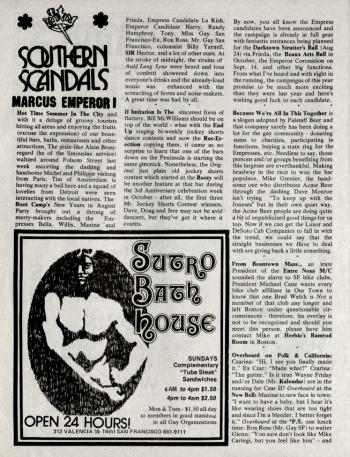 1970s
No account of San Francisco leather would be complete without the mention of Marcus Hernandez (aka Mister Marcus). Marcus was asked by B.A.R. co-founder Bob Ross to write a leather column for the newspaper. That column debuted in February 1972, just 10 months after the paper's first issue. For 38 years Marcus was the sometimes dishy and provocative voice of the San Francisco leather community.

Shortly after the launch of his column, the Imperial Court added the title of Emperor and Marcus was the first to be crowned, alongside Empress Maxine. This continued a long history of collaboration and camaraderie between local leather and drag communities.

To counter any lore that leather people were always a serious and stoic bunch back then, Marcus wrote in his first column: "Main topic of conversation around the MM (Miracle Mile) [nickname for Folsom Street at the time — Marcus eventually rebranded the area Valley of the Kings] is the 6th Annual Academy Awards put on by the Barbary Coasters on Saturday, February 19th at Seaman's Hall. Tickets selling for $3 are on sale in most of the bars. Nominees for outstanding achievement in bike events, conducted by clubs here and in Southern California last year, have been voted upon already."

Leatherwomen began to organize and the nation's first lesbian leather/BDSM organization, Samois, was founded in San Francisco in 1978. 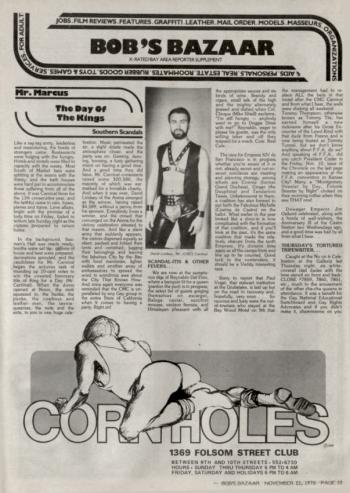 1980s
The 1980s can't be discussed without AIDS taking a front and center focus. Starting in 1981, when the first cases of a rare lung infection in Los Angeles were diagnosed (I knew one of those men) and an aggressive cancer was found among gay men in Los Angeles and New York, the horrific era of AIDS began.

From the start, the San Francisco leather community stepped up to help raise money at countless fundraisers. Leathermen and women banded together to take care of the ill while raising much needed money at a time when the government was essentially ignoring the disease since it was affecting primarily gay men. Women played a significant part in care of ill gay men and by my recollection this might have been the start of the men's and women's leather communities realizing they had commonalities.

As but one of many such fundraiser examples and the start of using leather titles as a fundraising platform amid the rising death count, Marcus wrote in the December 13, 1984 edition of the B.A.R., "...the idea came from no less than the young Dean Gibson, the Daddy's Boy for 1984-85. Plans are already being activated to issue bracelets in memory of our brothers who have passed away from AIDS-related illnesses. The bracelets will be engraved 'In Memory of,' and the name and date of his death and will sell for a nominal fee to support those AIDS patients now living and their families if the need should exist."

The iconic leather magazine Drummer headquartered in San Francisco at the time, proliferated gay leather culture to a wider audience than just the handful of urban epicenters.

Jack Fritscher was Editor of Drummer magazine 1977-79 and said this about the magazine's influence during this decade and beyond: 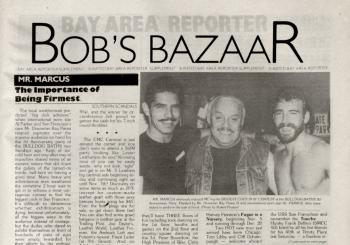 The first Folsom Street Fair, at that time named Megahood, was organized in 1984 by Kathleen Connell and Michael Valerio. Most assume the Fair was always focused on leatherfolk, but it was originally envisioned as a pushback against the displacing gentrification taking place in the area.

In 1985, shortly after Folsom Street Fair's maiden voyage, Patrick Toner and others organized the first Up Your Alley Street Fair on Ringold Alley to raise money for AIDS-related causes and to keep up the spirits of a community under siege by the virus. 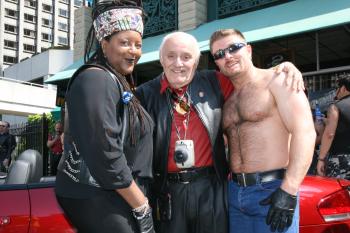 1990s and 2000s
Mr. Marcus continued to report on all things leather. At times Marcus was challenged because of his gossipy style and sharp tongue, both in print and in real time. But no one could challenge that he was the preeminent leather columnist of his day. His column continued until 2009.

One of the regular photojournalist contributors to the Bay Area Reporter, especially for leather community coverage, is Rich Stadtmiller. He had this to say about this era.

"As I recall, the prominence of early motorcycle clubs gave way to many of them shifting to 'leather/Levi clubs' in the 2000s and separate fetish clubs began to emerge. Then some of the clubs closed up shop or were struggling with declining memberships and there was a lot of discussion about how to reverse the trend.

"A broad array of kinks came onto the scene such as rubber/latex, puppy play, and athletic gear, with retailers and events catering to these growing subsets of kinksters. Of course, one can't think about this time period without noting the loss of so many leathermen to AIDS, men who would have otherwise been around to mentor the younger. Often younger people needed to find their own way and ended up creating their own path, forming clubs and networks configured for their specific kink needs."

In 2009, Marcus passed away and I and hundreds of other people attended the biggest leather memorial I have ever witnessed. Marcus was at times controversial, but his contributions to the leather community were significant and he will be remembered in the history books.

The same year of Marcus's passing, Scott Brogan took over the leather column. Scott wrote the column until late 2013 and always represented the community with respect and integrity. 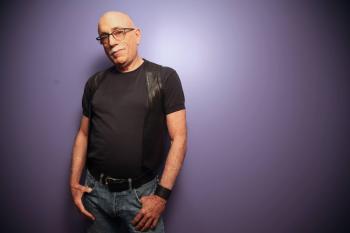 2010s - Present
In January 2014, I took over the B.A.R. leather column from Scott and published my first of 165 columns when editor Jim Provenzano asked me to take over the column. I agreed on the condition that in addition to traditional reporting content I could avoid all gossip and instead write pieces that delved deeper into various aspects of leather and kink culture, content that Jim and I would come to refer to as "think pieces."

My last column was published in February 2021. The B.A.R. continues to include leather community content in its reporting and has demonstrated that it sees the kink communities as an integral part of the overall larger LGBTQ community.

Over the course of my tenure with the B.A.R., I tried to cover topics that reflected the changing landscape of leather and kink. My more frequent use of the word kink instead of or alongside leather was intended to communicate to readers that the world of leather and kink has become a vast intersection of a plethora of sexual adventurers that has moved far beyond its initial leather incarnations.

Today our local, national, and international kink communities are increasingly diverse and comprised of an ever-growing set of kinks and identities. Change is the norm, and our kink scene is certainly evolving, and that's a good thing.

In closing, I would like to take this opportunity to mention that during my entire time writing for the B.A.R. I witnessed a publication of the highest quality, with utmost integrity, truly dedicated to stringent journalistic standards when presenting LGBTQ news and information. That includes their treatment of leather as well. Kudos to the B.A.R. Let's all try to make sure they're around for another 50 years.

While on this website, look in the upper right corner of the page for the Contribute and Subscribe buttons. It's important to ensure quality LGBTQ Bay Area and national news coverage lives on for readers for decades to come.

Here is what I have learned: Leather columnist bids adieu

Leather: Contests -and kink- in context

SF leather plaza inches along in SOMA
Sign up!