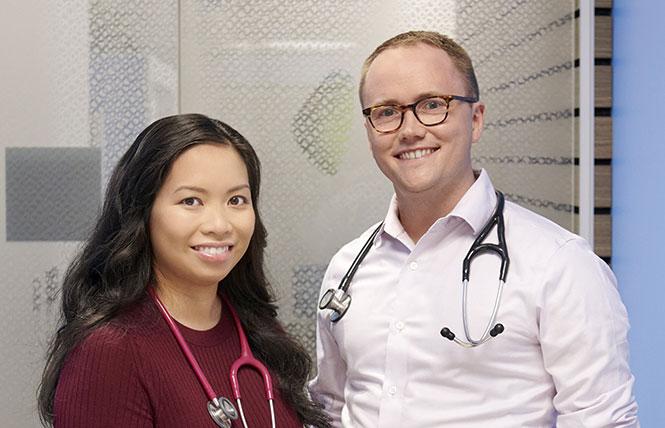 That 2020 made telehealth the norm, rather than the exception, has led to an expansion of the Stanford Medicine Virtual Pre-exposure Prophylaxis Program for Adolescents and Young Adults, which was launched by two physicians late last year.

The program at Lucile Packard Children's Hospital Stanford in Palo Alto serves about two-dozen patients who are adolescents or adults 25 or under throughout California.

"After I finished my medical training in New York, I had a fellowship down at the [Centers for Disease Control and Prevention] and became interested in the intersection of LGBT health and sexual health," Hart-Cooper told the B.A.R. "Initially, PrEP wasn't FDA approved for youth but it was certainly used off-label. ... Telehealth provides an important way to reach youth where they are from both the provider and patient perspective."

Vo said that "this has been in the works for almost four years now."

"People said it couldn't be done," Vo told the B.A.R. "They said 'people have to see you in person' and we didn't understand why."

The virtual program launched in December 2019, taking awhile to set up after the duo received an internal Stanford grant of $50,000. Under the program, patients are connected with a pediatric and adolescent care provider specifically trained to provide sexual health counseling, labs, and adherence support for PrEP.

"This was novel when we started working on it," Vo said, adding that since the pandemic they have been getting more referrals. "We do our best to make sure we can see people regardless of insurance status and can use a variety of patient assistant programs to cover the medication and make sure the issue of payment doesn't stop people from getting scheduled."

Hart-Cooper said that the program has been opened up to patients outside of network "for a few months now."

"A lot of our patients are outside of the network of Stanford," he added.

Accessibility is a lodestar of the program.

"The remote nature of the virtual PrEP program eliminates the need for patients to travel to a care facility, making ongoing care convenient and efficient, which is especially important during the COVID-19 pandemic," Hart-Cooper stated in a Stanford news release. "Virtual care allows us to meet youth where they are, even during transition to college or other moves, and offers an added layer of confidentiality, as it allows providers to communicate with patients one-on-one, without involving a parent or other guardian if that is the patient's preference."

Following a virtual intake visit, patients are mailed an at-home testing kit; ongoing labs are conducted every three months at a local clinical laboratory, PrEP prescriptions are fulfilled via a patient's local pharmacy, and patients have biweekly video calls with their dedicated PrEP navigator. The program is available to anyone in the state of California regardless of whether they are an existing Stanford patient, and in almost all cases the cost is supported through various patient assistance programs, the release stated. Insurance and co-pays are another option.

In October 2019, Descovy was approved by the federal Food and Drug Administration as a second drug for use as PrEP (joining Truvada, which was approved for that use in 2012). Vo said that accessibility is the most important factor. Descovy costs about $2,000 a month.

"There's a lot of marketing and news around the new drug," Vo said. "Our patients are able to access the generic more easily. To me whatever they can access is what I want them to take."

Generic Truvada became available in the U.S. about two months ago. It costs about $1,455 per month. Insurance generally covers the generic Truvada and Teva, the company that makes it, has a patient assistance program.

The Stanford program also provides webinars to educate pediatricians around the state about PrEP use.

"Some providers, particularly pediatricians, may not be aware of, or trained, to provide HIV prevention tools, such as PrEP, or may not have experience discussing sexual health with young patients, which can make it difficult for youth to disclose sexual behavior, or lead to concerns about confidentiality," Vo stated.

Patients connect to the health care provider via their computer or mobile devices. People who are interested in joining the program can call (650) 497-2701 or visit https://www.stanfordchildrens.org/en/service/prep