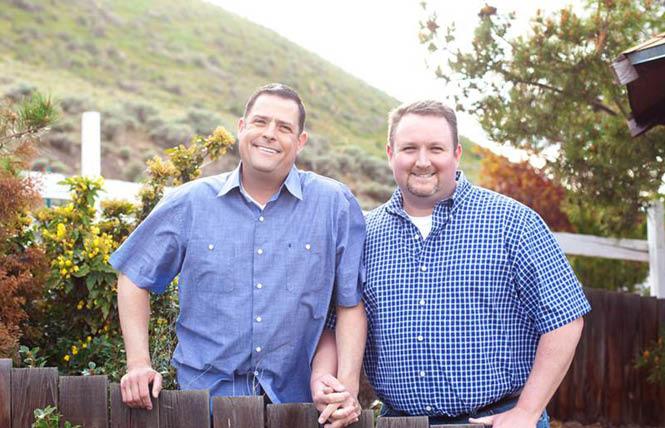 The U.S. Supreme Court has declined to hear an appeal of a florist who refused service to Robert Ingersoll, left, and Curt Freed because they are gay. Photo: Courtesy ACLU

On the last day of the 2020-21 session, the U.S. Supreme issued relief and worry for the LGBTQ community.

On the relief side, the court on July 2 indicated it would not hear the appeal of Barronelle Stutzman, a florist who turned away a couple getting married because they are LGBTQ. The case, Arlene's Flowers v. Washington, purported to be the "ideal vehicle" for resolving the original question skirted in Masterpiece v. Colorado.

In Masterpiece, in 2018, the U.S. Supreme Court voted 7-2 in favor of a baker who refused to sell wedding cakes for a same-sex wedding because, he said, to do so violated his religious beliefs. But the court did not say the baker had a First Amendment free exercise right to violate Colorado's law against sexual orientation discrimination.

By refusing to hear Arlene's Flowers, the Supreme Court is avoiding that issue for now and leaving intact a decision of the Washington State Supreme Court, which ruled against the florist twice — once before and once after the Masterpiece decision.

"No one should walk into a store and have to wonder whether they will be turned away because of who they are," said Mar. "Preventing that kind of humiliation and hurt is exactly why we have non-discrimination laws. Yet 60% of states still don't have express protections for LGBTQ people like the kind in Washington State. Our work isn't over yet."

One of the men in the case expressed how devastating the experience was.

"After Curt [Freed] and I were turned away from our local flower shop, we canceled the plans for our dream wedding because we were afraid it would happen again," Robert Ingersoll stated in the ACLU release. "We had a small ceremony at home instead. We hope this decision sends a message to other LGBTQ people that no one should have to experience the hurt that we did."

On the downside, the Supreme Court Friday agreed to hear a case where, once again, religious entities are trying to find workarounds to laws and policies separating church and state. The court granted review to Carson v. Makin, which is not an LGBTQ-related case but is yet another instance in which religious entities are seeking special dispensation under ordinary law. It's also a case that echoes the arguments religious entities have been making to avoid complying with non-discrimination laws: that the religious person isn't discriminating against a gay person, but discriminating against a person because his or her partner is of the same sex.

In Carson, the parents of five children in Maine are fighting a state policy of providing public funding for parents to send their children to private schools that are willing to provide "nonsectarian education." Maine does not provide funding for parents to send their children to schools providing religious education. The 1st U.S. Circuit Court of Appeals said Maine could withhold funding to sectarian schools because the exclusion was not based on any school's religious affiliation but on "on what the school teaches through its curriculum and related activities, and how the material is presented."

The Supreme Court did not indicate whether it will review an appeal from a Roman Catholic-run California hospital that refused to perform a hysterectomy for a transgender man. The case, Dignity Health v. Minton, was on the court's list of cases to review in its private conference July 1.

But the court did refuse to review a lower court decision in Hoggard v. Rhodes, brought by the anti-LGBTQ Alliance Defending Freedom. In the case, a student at Arkansas State University said her First Amendment rights were violated when the school refused to let her ignore university rules regarding the setting up of a table to promote the campus chapter of Turning Point USA, which advocates conservative values on high school and college campuses. The student lost in the lower courts on procedural grounds.

US Supreme Court sides with teen in free speech case